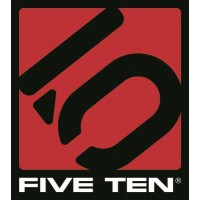 Five Ten, the Brand of the Brave, is a leader in performance, high-friction footwear. From downhill mountain bike racing to rock climbing, from wing suit flying to kayaking, Five Ten makes footwear for the world's most dangerous sports. The Redlands, California-based company has been producing cutting-edge designs and proprietary Stealth rubber soles for nearly 30 years. With the help of top national and international athletes and guides, combined with a world-class rubber-testing and R&D facility, Five Ten is the shoe brand of choice for the world's most exciting athletes.

Five Ten?s roots trace back to Yosemite and Joshua Tree National Parks. Charles Cole, Five Ten?s founder and president, started the company in 1985. At the time, he was a footloose, 30-year-old climbing bum whose motto was ?one with the dirt.? All climbers need rest days and Cole?s were well spent, earning him an engineering degree from University of Southern California and an MBA from the University of Michigan, Ann Arbor.
Raised in Southern California, Cole paid his climbing dues on the rough rock of Joshua Tree. Like many of his climbing contemporaries, he turned his sights to vast walls of Yosemite. Many of Cole?s first ascents, including the False Shield and Jolly Roger on El Cap, and Space, Queen of Spades and Autobahn on Half Dome, remain test pieces today.

In July of 1985, after a particularly exhausting solo marathon up the Steck Salathe, Cole, in his hurry to return to Camp 4, had a near-miss slip while descending. By the time he safely reached the ground he had formulated a plan and Five Ten was born. The name Five Ten refers to the Yosemite Decimal System, a rating scale used to determine the technical difficulty of a climbing route.

Approaches and descents are often the most dangerous parts of the climb, made even more treacherous by the slick-soled sneakers that climbers used to wear. In school, and on the walls, Cole often contemplated why the existing climbing rubber was inadequate (one best-selling shoe at the time utilized old airplane tires for soles). Working with some of California?s leading scientists and experts in the field, Cole immediately started developing Stealth high-friction rubber. Five Ten?s first rubber compound, Stealth S1, revolutionizing climbing due to its tenacious grip and durability. The original Five Tennies created the approach shoe category, providing climbers with traction and sure-footed dependability on approaches and descents. Athletes soon established Stealth as the benchmark in high-friction footwear. There are currently nine Stealth compounds, each formulation offering distinct tuning attributes. Athletes can now pick the best rubber solution for their specific sport.

By the late 1990s, mountain bikers had discovered what climbers already knew?Five Ten and Stealth Rubber improved performance. Since then, riders with Five Ten shoes have dominated the Downhill World Cup Circuit, become the go-to footwear for bike guides around the globe and become the favorite of urban trick riders like Danny MacAskill. For 2013 Five Ten continues its tradition of innovation with the Freerider Vxi and new Stealth Contact solution for pedal dynamics.